I don't want to rub it in, but being a high school English teacher in Israel has its perks, and it also has its miseries. But what better way to celebrate the end of the school year than by hosting Havel Havelim? 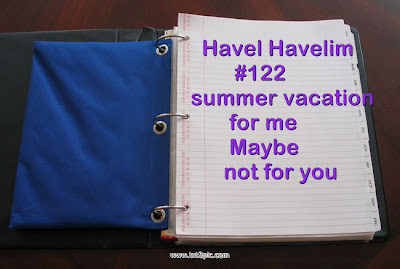 Havel Havelim, the international jblog carnival, was established by Soccer Dad, whom I finally f2f-ed. For proof of that, read this entire Havel Havelim to the very, very end. It's now probably the longest-running blog carnival under original management.

The term “Havel Havelim” is from Kohelet, Ecclesiastes, which was written by King Solomon, who built the Holy Temple in Jerusalem and later on got all bogged down in materialism and other “excesses” and finally realized that it was nothing but norishkeit, “havel” or in English “vanities.” I think that King Solomon and his father King David were the original "bloggers." The books they wrote, when you take them chapter by chapter, can easily be described as blog posts. The stones they used to write on made them last, so that we can read them now. I doubt if today's technology will give our words any lasting effect.

I don't want to give this edition an "eyin haraa" as I put this together, but I must say that the quantity and quality of posts jbloggers have been mailing me is very impressive. #122 won't be organized in any way, just haphazard, since many posts came in emails, not the form with the topics. It's ok.

Now for the show:

Can you identify the blessing that inspired this?

Light, darkness, and peace
These, and everything, you made
G-d, King of the world

That's from NY's Funniest Rabbi, and there are more haikus to enjoy. And posts about losses and links.

Barry, the irrepressible English teacher from northern Israel sent three, which he posts on ETNI. One, two, three!

Here are tales of the Trisker Maggid from yitz.

And nuch epes ah chosid wrote Grace is deceitful - שקר החן and about Writers Block. What do they have in common?

There's always something to photograph in Jerusalem.

Not quite perfect posted a perfectly good Torah Numbers Chart.

It's nice when the neighbors work together, even though it would be even nicer if it didn't have to be because of a fire.

This is very interesting from Yid with a Lid about Britain and Concentration Camps. And another about how badly Arabs treat their "brothers."

Dixie Yid mulls over why we sleep.

My husband mocks Ma'ariv newspaper for their incorrect prediction.

Solomonia has some surprising news about the Hamas Prime Minister.

I agree with Shmuel, Inspirations from the Golan. Just lovely.

Shvach Yid writes about the Rebbe. And so does Life of Rubin.

Cross-currents is pleasantly surprised by an article in the media.

Here's some impressive news about Israel on Planck's Constant.

Slightly Mad is coming together for laughs.

This was very, very, very off, off, off Broadway, not even the same continent!

Read The Best Father’s Day Gift Ever on Temunot.

For a little Parshat Shavua, Kadima is a Korach kind of party.

Here's something special from Fred.

Not quite a Trojan Horse, but Marallyn's UPS story makes a good reason to boycott them.

One, two, three strikes you're out at the first ballgame!

If you need a laugh, read Judy Gruen's latest.

I'm (a) biologist writes an excellent post about being a working mother in Israel.

Here are two posts from Circus Tent. Both concern the fact that "Gimmel Tamuz is the 25th Yohrtzeit of HaRav Reb Shneur Kotler, z"l, Rosh Yeshivah of BMG in Lakewood, and father/father-in-law of the four current Roshei Yeshivah." Money talks at BMG (the other gimmel tamuz) and 3 Tammuz was the end of the line ------

The 19th Kosher Cooking Carnival is at Baleboosteh. It's a great one, and if you're interested in hosting an edition, especially this coming July's, please let me know. Thanks!

Irina writes about her experience attending the farewell event of AJC for the departing German Political Consul. As usual, her observations are fascinating.

Travel to Israel offers ways to commemorate the Lebovitcher Rebbe.

And Yitz has a very full post of stories about the Rebbe, including one about Rav Shlomo Carlebach.

Ari tells about Poetry With Trop In Early Baltimore: Part I.
From Life in Israel, Israeli man marries donkey (video)—don't worry. It's a joke.

For the greatest jpix from the past two weeks, the Bagel Blogger brings you the 10th JPIX Carnival! Submit a post to the Next JPix Carnival The 11th will be at the Baleboosteh, and if you're interested in hosting contact Mr. Bagel.

NY's funniest rabbi is getting serious.

Here are some Torah Thoughts on Parshat Chukas.

According to Sin of Expulsion: Gay Bash a Bust, But Watch for Precedent.

From the Elder of Ziyon: A Psychological History of Palestinian Arabs, part 6

Yid with a Lid writes some strong things against the Chabadniks who call the Rebbe the Moshiach.

Frumhouse writes of "joobs;" the male jbloggers will be disappointed, but the females will relate!

From Little Green Footballs we have A Visit to Fatah's Torture Chamber.

Joshua Pundit shows how unsuitable Blair is to be envoy. And more on the same, from the Spine.

Chana gives us a guide to Jewish Chicago. So, if I ever visit my cousin near there, I'll know what to do.

Mottel has Smicha! Look at all the pictures his proud mother took!

From the Israeli Satire Laboratory, we have: Olmert: Hamas Takeover – Opportunity For Peace With Settlers!

Life in Israel posts a very Israeli story about a hitchhiker.

There's a well-known Passover song that teaches the significance of numbers in Judaism. So, yes, we, or most of us, have no problems with numbers up to 13. Soccer Dad posted a number quiz from his nephew's Bar Mitzvah, with many, many more. Try it!

My husband sort of won against the NY Times.

DAG has opened a T Shirt Store; take a look. And DAG also posts about the new strawberry halachot. Will we ever get to eat strawberry jam again?

Tamar Yona was at the parade.
Akiva asks if we want the Moshiach now.

tnspr569 has landed back in chutz l'Aretz. Good luck! Hope to see you back home real soon.

Toronto Pearl and her husband heard some great Jewish music, From Kol Nidre to George Gershwin.

What should we eat on those late Friday night Shabbat meals?

Carl's Corner
Unlike many bloggers who may have sent me as many, links if not more, as Carl did, Carl sends the week's supply in one large package, and I can't spread them around. So I just find it easier to give him a special corner. They are always interesting, so dig in and enjoy.

Israel Matzav: Thinking outside the box
What Hamas really wants
How much for a Nobel Peace Prize medal on E-Bay?
Israel Matzav: Israel to attack Hamas in Gaza?
Israel Matzav: Olmert goes to the US to schnorr for Fatah
Israel Matzav: Hamas bans Gaza terrorists from wearing masks
Israel Matzav: Who's to blame?
Israel Matzav: US and EU taxpayers paying Hamas
So much for the 'Hamas-free' 'Palestinian government'
When Congress says "jump," Egypt asks "how high"
Alan Johnston is caught in a clan war
Fatah's torture chambers - do they matter?
A definition of terrorism

*Very few people trust the media, so if you want the truth, read blogs!*

For the truth about Rashid Khalidi, read Sandbox!

And for the truth about Hamas, read Secular Blasphemy.

And for the truth about Abbas, read The Colossus of Rhodey.

And for the truth about what ordinary "Palestinians" think read History News Network.

On In Context, you'll read the truth about what Israel does for the Arab fighters.

The Gates of Vienna tells the truth about Europe.

Schvach tell the truth about Britain's latest boycott of Israel.

Danny Bermant tells the truth about who's to blame for Hamastan.

What's the truth about the Evangelical Christians? Read Schvach Yid.

Read about the true crisis on Israel and the Sin of Expulsion.

Read the truth about American support of Arab terrorists.

Law hawk tells the truth about what's going on between the Arabs and Israel.

Sultan Knish tells us the truth--Reductio Ad Occupationum - Blame Israel for Everything .


Rafi G. tells us the true story behind the scenes of the OSIRAK bombing!


Ezzie give us a true lesson in micro-terrorism.

Yid with a Lid tells the truth about Jimmy Carter's Legacy.

On Seraphic Secret, we learn the truth about the Arabs.

Meet the true Bibi Netanyahu. He's definitely not on Israel's right.
Yid with Lid tells the truth about Arthur Waskow.
Send your links for the next edition of Havel Havelim via blog carnival, and at the same time you may discover other “carnivals” to visit and enter. You can also use those forms to send kosher recipes and other kosher food posts to the Kosher Cooking Carnival. Blog carnival also has a great listing of recent carnivals for your sidebar. You can either get one for a specific carnival, like HH or KCC, or a general one.

Just a note:
I've been taking my turn at hosting Havel Havelim for quite a while, (maybe Soccer Dad will tell us when my first was,) and I'm awed by the growth and changes in the jblogging world. There are such richness, depth, intelligence and perception in the posts I've read. Also, now jbloggers know to send their posts. I'm pretty sure that this is the largest Havel Havelim I've ever hosted, and almost all of the posts came either from the blogger or from other bloggers who felt that they should be included. It's definitely a privilege to be of this period of time and part of the international jblogger community.

Thanks to Soccer Dad for his hard work keeping this going, and if you want to host, please let him know at dhgerstman at hotmail dot com.

This appears in the UberCarnival.

Please put up a blurb on your blog alerting readers to Havel Havelim and the fun they'll have reading the various posts. Thank you! 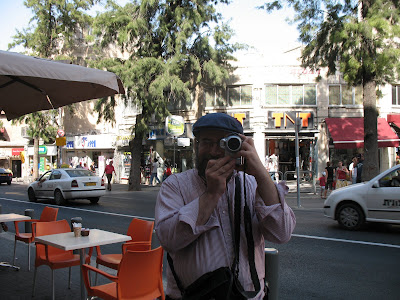 Yes, that's Soccer Dad on King George Street, Jerusalem! I just wonder what happened to the picture he took of me.

WOW, WOW, WOW, how beautiful, and such rich content.

Thank you so much for the links.

This is by far one of the best or the best Heval Havolim to date. I think

What a wonderful, kindhearted job.
Thank you!

Thank you and what a WONDEROUS JOB you have done!

woohu muse...and thanks for the tumbs up...maybe when we meet today you can teach me how you did that...wowowowowowow...thanks...shavuah tov

Glad to see the finished product (as well as its producer). Excellent job. Sorry I missed SoccerDad.

Thank you for the links and for the great job; we're still teaching for another week still. Enjoy!

Thank you one and all. I certainly could not have done this without all the wonderful posts you have blogged!

We can change the world!

Thanks for the beautiful web page, and for the link.

is this a record for the biggest hh??

Thanks for the link, and another amazing job.

I just posted part 7 of my series, A Psychological History of Palestinian Arabs, as well.

Thanks again.
I don't know if it's the largest, but it's amazing.

thanks for the link. great job!

Thanks for the link! Hope you enjoy your vacation (over here in NZ, we've one more week to go before we get a two week break).

glad you liked it