Cook in Israel, Another Cookbook 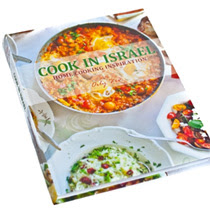 Orly Ziv's Cook in Israel is a beautifully produced cookbook. It's attractive and professional-looking.  It doesn't skimp on photographs and isn't full of frightening complicated recipes. The recipes aren't full of exotic, expensive never to be used again ingredients. From what I understand, Orly Ziv is a cooking teacher with a large following.

I would really like to only praise the book, but in all honesty, I just can't.  It's not just the quirky English, "tomatoe" and "rough salt" sic which could have been corrected with a good editor.  It's the use of butter and milk in recipes that should be parve, meaning neither meat nor dairy.  Orly does explain that she's a pesco-vegetarian and eats a lot of dairy. For people who live on a similar menu, this will be the perfect cookbook.

IMHO a kosher and/or Jewish or Israeli cookbook should not have so many recipes with hidden dairy ingredients. By "hidden" I mean unexpected.  If someone is served a baba ghanoush or babka he/she doesn't usually expect them to be dairy.  If there's a new edition, I'd suggest adding ways to take out the dairy and make the right substitutions.  That way those who are on a non-dairy diet can fully benefit from this wonderful and tempting book.

Bread is not supposed to have milk and butter, and if you do want to add dairy to cakes, which would normally be eaten on Shabbat and other festive meals when meat or poultry are eaten, then at least provide easy to follow and find alternatives for the dairy. This is a serious kashrut problem. Just because Ziv is vegetarian, she shouldn't limit her potential customers to those who eat the same way.  Yes, when buying a general, secular cookbook, we know we have to adjust recipes, but a good Jewish cookbook should be much easier to use.  It should be written for those who keep a kosher kitchen.

And nowadays when more and more people are discovering that dairy isn't healthy for them, a cookbook filled with recipes that require butter, yogurt and milk isn't a good idea.

I've just given you my opinion.   I'm sure that many people really will enjoy this cookbook, but I almost never serve or cook with dairy ingredients.

What's interesting is that kosher labeling is becoming a requirement by law in Israel.  Dairy, Parve and Meat will have to be clearly labeled.  Homemade and restaurant food should also indicate if it's strictly dairy, meat or parve.
Posted by Batya at 1/08/2014 04:00:00 AM

Batya, thanks for submitting this post to my edition of the blog carnival! :) http://foodiscoveryblog.blogspot.com/2014/01/foodiscovery-presents-batya-medads.html