Instead of a Colonoscopy For Some

I don't know if they use this thing, which doesn't have a name in English, in other places. The "kit" has Hebrew, Arabic and Russian, only. 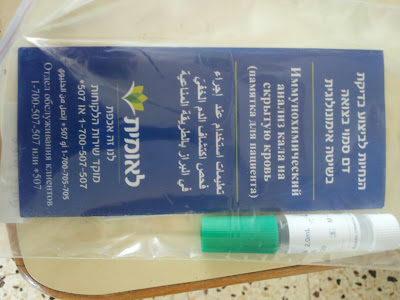 This is how I described it to some friends:


I did do that non-invasive colon thing. Call it the sh#t stick? In Leumit (the healthcare fund I'm in) if you're low risk you don't do a colonoscopy. You get a flushable paper to put in the toilet and make on it. Then you stick in the tip of a magic wand and screw the wand in a special jar, take it to the nurse who puts the wand in some magic stuff, and it tells if there's trace blood. If there is then the colonoscopy. B"H I'm ok.

This has to be done every year, but it sure beats the colonoscopy. It isn't offered everywhere, though, and it may not be for the high risk ones. What are these tests called, besides sh#t stick?

it's called the stool test for occult blood. it is not considered as thorough or as reliable as a colonoscopy. it only detects a tumor that is already cancerous, and only if it is bleeding. colonoscopy detects precancerous polyps.

Thanks. I didn't know. So I guess it isn't all that great.