One of Those Weeks and A Bit About Shiloh

They say things come in three's...
(Apologies if it's based on some Christian theology.) 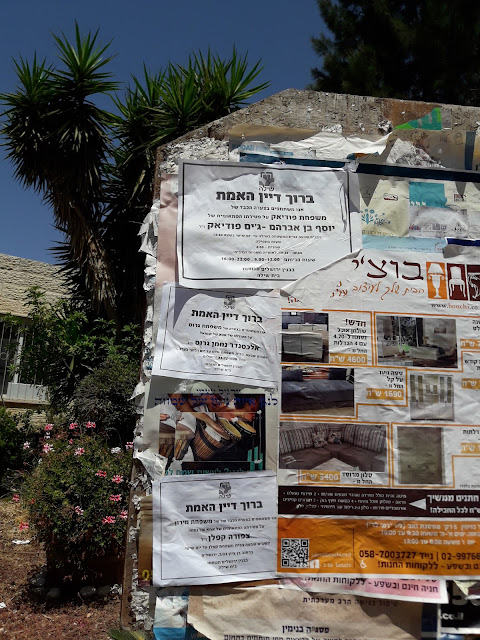 As you can see from the bulletin board, three "death notices." If you don't know Hebrew at all, the words ברוך דיין האמת BARUCH DAYAN HA'EMET, mean Blessed is the True Judge, and the phrase is used to announce or react to the death of a person.

Two of the families I know very extremely well, and the third, I'm just acquainted with. But the strangest thing is about these three is that they have something in common. They are all American-Israeli.

Now you probably know that Shiloh isn't considered one of those very "Anglo communities" in which one can easily manage barely knowing any Hebrew.  But the truth is that there is a sizable and active English speaking community, of which some members aren't "anglo-born." To be more accurate, there are two anglo crowds in Shiloh. One is of my generation which includes great-grandparents and young grandparents, and the other one is a generation younger. That younger generation includes immigrants and native-born Israelis who were raised in English-speaking homes, some of whom surprise people with their perfect English.

Only one of the mourning families is sitting shiva in Shiloh, two of the funeral were at exactly the same time but different cities, and the third will get up from shiva this morning.