Yesterday was one of my super early and very stressful trips to Jerusalem to get to class in Matan. I thanked Gd profusely for arranging a ride, which dropped me off in Pisgat Zeev where I totally miraculously caught the horrendously infrequent #49 bus to Talpiyot. Once I was on that bus I planned to get off at the Liberty Bell Gardens/First Station stop and use the loo there. In the past I had found it open very early, 6:30 if not mistaken, since there were fitness classes at the station. At just after 7am, I saw the keys in the lock and the door just slightly ajar. I was told that it was closed. Grrrr... That was bad news, since I was really counting on it. 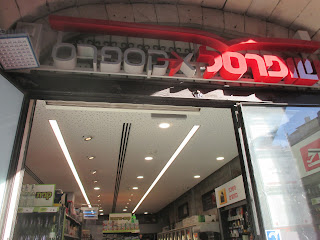 So, I began walking up Emek Refaim Street peering into the few stores open early in the morning. This newly opened branch of Shufersal Express, שופרסל אקספרס looked so attractive and inviting that I decided to give it a try. Apparently, it is so new, it's not even listed on the Shufersal (yes, this is the 21st century version of the veteran Super Sal chain) site. I walked around the store looking for signs of a public toilet and finally found them in the back. And I must say that the entire store was spotless and orderly. 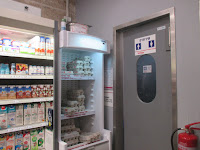 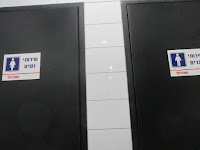 I do appreciate it when the public toilets WCs are easy to find, and you don't need to ask staff. Generally the harder they are to find the worse the conditions are inside. 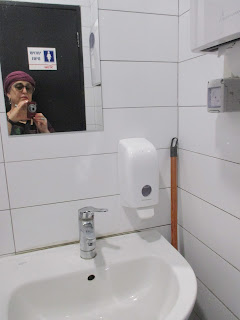 These were clean and well-stocked. Of course, the store had just recently been opened and renovated.

When I walked out, I saw one of the workers, who gave me a strange look, since I had just photographed the door. So I said:


"I write about Jerusalem's public toilets, and you will get a very high rating!"

That's true. This branch of Shufersal Express does have a first class loo. I am very glad to have discovered it. And if I need groceries when in the area, it'll be my first stop.

I'll have to check out other branches of the chain to see if it's a requirement, since the internet site said that these are mostly franchises.
Posted by Batya at 6/08/2017 08:20:00 AM