Less than two years years ago I bought myself an inexpensive watch. I didn't even have to pay real money for it. I got it for 59 FOX points, and it was great until just under two weeks ago. While eating at the "farewell" luncheon in honor of my husband's 70th birthday and retirement from work something suddenly clanked/fell on the table. It was my watch. The band just broke, clunk.

I realized that the time had come to replace it, but since the watch itself was still working, I didn't rush. In all honesty, I don't believe in buying expensive watches. I try to find one with a simple plastic band that cost not much more than a replacement battery. I also hate the digital ones and like an old-fashioned one, which doesn't even need numbers.

A lot of the inexpensive ones are junk and even overpriced. When I was in Jerusalem last week I passed some stores with lots of watches and claimed that they were 50% or even 70% off. Now, I'm not that dumb. If a store is making such claims on all their stock, either the initial price is super-inflated or they've been holding the stock so long that the batteries are due to die really soon. And to top it all off, when I looked in the windows, none of them attracted me.

The next day I noticed that the watch, which I kept in a pocket, was losing time. Oops. So it was useless. Of course, six days a week, all I need is my phone, which has a clock. But then I realized that Shabbat was approaching when I couldn't use to phone to see the time. So that night when I saw a neighbor who has a great clothing, toy and misc. store if she sold watches, she said "yes, a few." The next morning, Friday just before Shabbat, I went in and after seeing a few which didn't really appeal, though the prices did, suddenly he daughter pulled one off of a shelf behind her. 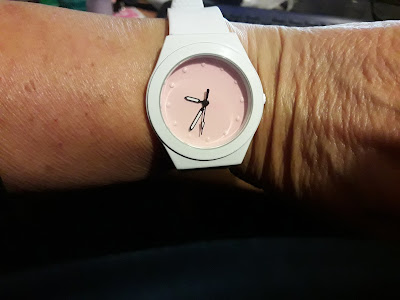 Email ThisBlogThis!Share to TwitterShare to FacebookShare to Pinterest
Labels: watch