I've been thinking of changing my breakfast a bit, since I always end up hungry and craving fruit afterwards. For the past few years I've made myself a nice two-egg omelet for breakfast. It did the trick for quite awhile, especially if I have to rush out afterwards. It's a real meal. But recently a few unwanted pounds and kilos have stuck to me, and I'm just not happy with my food routine. It's not working.

I'm also not working now and must find a way to spread my food and calories over the day better, eat less, exercise more and get the weight off.

Thank Gd, bli eyin haraa, I have no health issues. Blood pressure and blood tests are fine. That does make it easier in theory. But as I've gotten older, I'm less tolerant of heat and cold. That forces me to be indoors more. And indoors means less walking.


Yesterday I had a busy day planned. Instead of making an omelet, I prepared a quick and simple muesli of raw oats, cut-up peach and some goat yogurt. It was delicious. 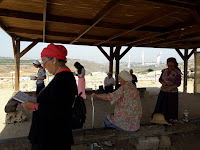 First I went down to Tel Shiloh for Women's Rosh Chodesh Prayers, road half way down. That included a bit of a walk, but less than you'd think. That's what the pedometer says. From there I got a ride to the Eli Junction. After a few minutes' wait I got a ride to the Yarkon Junction where my cousin picked me up, and we went to the Sharonim Mall. We walked around the mall, which is always pleasant, and then we had lunch. I probably shouldn't have had the quiche...

Then, again, I was at the Yarkon Junction, but at the bus stop to Ariel. Two minutes later I was on a bus to Ariel, which included a "tour" of the lovely vibrant city. Then I waited awhile and finally got a ride to the Shiloh Junction. From there a ride to the Shiloh-Shvut Rachel Junction, then another to where most of our stores and clinic are. And then a neighbor took me home.

Once home I kept drinking lots of water with freshly squeezed lemon juice and lots of ice. I had to rehydrate. Later on I made myself a low carbohydrate salmon dinner. I was so exhausted that I went to bed much earlier than usual.

B"H I slept well and got up before my alarm. Now I'm bored. This is the only day this week I have no plans, and since the pool is closed for the "nine days," there's nothing to do.