"BIGA" Meal in The Grand Kenyon, Beersheva, Waste of Food 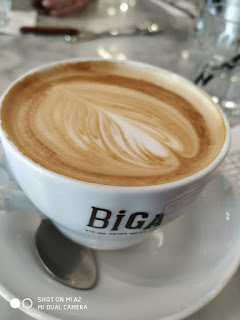 I wrote here and on Shiloh Musings about my trip to Beersheva last week. Besides a bit of touring around we had a late lunch in the BIGA dairy restaurant in the Grand Kenyon Mall.

The menu had a great variety of salads and other dishes. They also had a choice of luncheon specials, "business lunch," which offered a first course, main course and a drink, for either ns49, ns59 and ns69. I went for the ns59 and took beet and kolrabi salad as first course with a nicoise aka tuna salad as my main course. I took the selzer as my drink. The coffee here was ordered by my friend.

The truth is that I really should have shared the meal. The portions were so large, even I couldn't finish it. And both salads were delicious, really. Or I should have ordered a smaller meal and not the business lunch.

I had so much left over of the nicoise salad that I asked them to pack it up to take home. That's very common for me. It was going to be my dinner.

You may have noticed that I wrote "It was going to be my dinner."  If you're good at English grammar, you may have realized that by using that verb form, I'm telling you that it wasn't my dinner in the end. That's right.

A few hours later, when I got back home and opened the bag to serve it to myself, I discovered a big disgusting mess. No, I didn't take a picture of it. Unlike every other restaurant from which I've ever gotten leftovers to take home, instead of putting the food in a closed plastic container, BIGA used a cardboard box. The cardboard may be fine for bread and cake, or even pizza, but the liquid and oil in the tuna salad turned the cardboard to mush. It was no better than papier-mâché made out of wet, soppy newspapers. So, I had to throw it all out. Kapora, it certainly wasn't worth endangering my health trying to eat any of it. At least what I had eaten in BIGA was tasty, and I had food at home to heat up for dinner.

I agree with every word. HUGE portions and a lovely menu to choose from! It was great seeing you Batya!

Darling, I should have insisted on sharing with you, since I threw out half the food because of their incompetence/stupid anti-plastic policy.