One of the more recent Saturday night, Motza"Sh, meaning after Shabbat, activities here in Shiloh has been singalongs.

Way back when in the early decades in Israel, singalongs were very popular social/cultural activities. There would be slides, a slide projector and a big screen or cleared off wall, so the participants could read the words. Music would frequently be provided by someone playing an accordian. When there wasn't anyone to provide live music, there would be a tape recorder. Now everything's online and via the computer. Last year when I attended a singalong, the volume was turned down and a young neighbor ended up playing absolutely everything on the piano.

This time one of our "social coordinators" combined a television program about Yair Rosenblum with some "slides" of the lyrics. 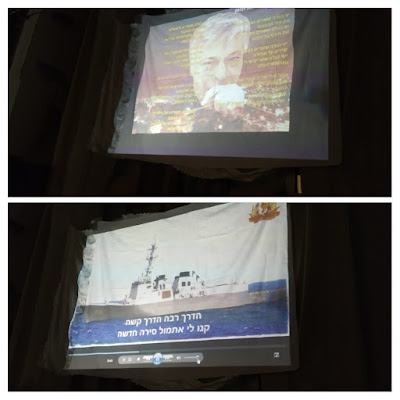 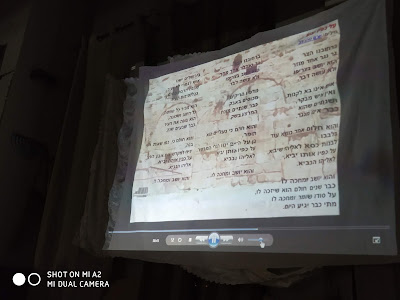 I'm not an expert when it comes to who wrote Israeli songs. I know almost nothing, except about Naomi Shemer.  In a sense they were contemporaries, since they wrote some of their most famous songs during the same time period.

Some songs I knew, others were familiar, and some I had never heard before. It was an enjoyable evening. I'd really like a singalong of Israeli songs we used to dance to. Then I'd feel young...
Posted by Batya at 12/15/2018 11:36:00 PM