"The Pater," A Book Review 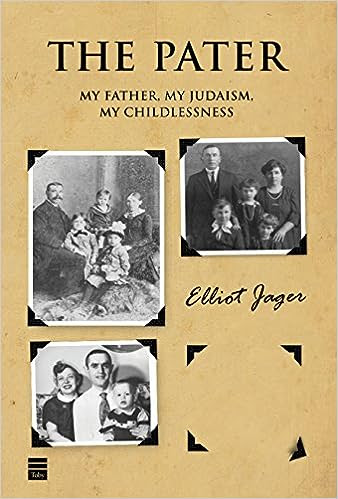 As soon as I had heard that Elliot Jager had written a book, The Pater, a memoir, I knew I had to get a copy to review. To be honest, I must admit that we're acquainted through mutual friends, and I remember their excitement at his and Lisa's meeting and marriage. Also, it was Jager who is responsible, indirectly and unintentionally, for my blogging. When he was working for the Jerusalem Post, he was the editor who told me that the op-eds that I had been submitting would be held for days (or longer-- one wasn't published for months) and I couldn't submit to multiple publications until I got an official rejection. After hearing that, I knew that I needed to find a much better way to get my views out. And I've been a blogger ever since.

Now back to the book, The Pater. It is focused on the fact that Jager and his wife Lisa are childless. Years ago, I had thought they had a child, but it must have had been because I had seen Lisa holding one of those of the mutual friends.


From Bible stories to Hasidic folktales to contemporary media, the discourse on infertility is becoming an increasingly widespread topic for open discussion. However, it largely remains within the context of womanhood. In THE PATER, writer and journalist Elliot Jager tackles what has until now been an almost taboo subject: what it feels like to be a childless Jewish man...

This is a topic that many people don't talk about, especially the men. And in his book, Jager tells more than his own story. He searched for and interviewed other Jewish men who never had children.


Elliot Jager: "No man has ever written a book about the meaning of life without children. This is that book. I try to blend my personal story about my relationship with my Holocaust-survivor father. He abandoned me on the Lower East Side when I was a boy. We did not see or speak to each other for 30 years. Then, our reconciliation was overshadowed by his religious obsession over my childlessness. I also tell the stories of other childless men often touching on their relationships with their fathers. And, throughout, I grapple with the quest to find meaning--Jewish and otherwise-- in a life without children."

The Pater isn't an autobiography written in a clear sequential order. It is more like a box of  old treasures you find in "the attic," and as you pull things out you're taken back to various non-sequential events in your past. At times it was a bit confusing, but I was able to follow. And I actually liked the fact that it wasn't organized in a logical sequence, nor is it divided in sections/topics. The interviews with other men are dispersed throughout the book. It's very possible and probable that Jager has a system, possibly according to how similar or dissimilar the stories and conclusions were to his own.

I definitely recommend reading The Pater and also giving it as a gift. As difficult as the topic may be, the book is very easy to read and did not take me long at all. It's not a "heavy book," nor is it depressing. I found one small mistake in Jager's Biblical examples. He stated that in the Biblical cases of infertility all of the men had children with other wives. That isn't so; Isaac had no other wife nor children except the later born twins with Rebecca.

Parallel to the subject of Jager's infertility, is his religious evolution from the Yiddish based Orthodox Jewish education of his childhood, to secular American university to labeling himself as a Conservative Jew and finally admitting that he never was a strong believer.

In today's world, in which marriage and children and large families are less common than they once were, there are many cases in which people find themselves the "last of the line" from either one or both parents. By writing The Pater Jager also mourns his mother and her parents, because both she and he were "only children," and there are no more from their direct line. His mother was an amazingly strong woman who managed to support and raise Jager on her own under very difficult circumstances. I see this book as a tribute to her. And no doubt it will be read for generations to come...
Posted by Batya at 1/17/2016 08:24:00 AM