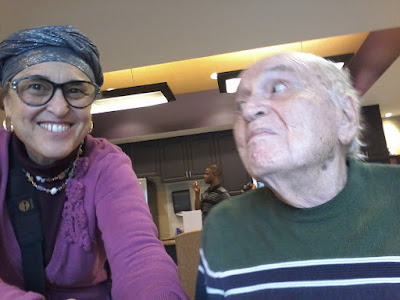 Far from their native New York, in Arizona and Florida, two former neighbors are in very similar conditions. As I've written many times, my father is in a "memory care center," since although he can still walk around, feed himself and enjoy company and all, he can no longer "take care of himself." And our former next door neighbor in Great Neck, Ruth, who had also been a neighbor in Bell Park Gardens, Bayside, is in Florida, also needing care. Her daughter Lisa writes about what they are experiencing.

Looking at photos like these, you wouldn't have a clue that something was amiss or missing in his brain. Even though he can walk around, for safety uses a "walker," feeds himself and carefully wipes his face with a napkin, he can't be left on his own.

Apparently there are dozens, if not hundreds of types of dementia and in many cases, they are combined. Nothing about old age is simple. And people don't die from dementia as a primary cause. If they aren't in a proper setting with readymade food and caregivers, they can die of starvation, malnutrition, not caring for injuries or taking too few or too many medications.

In actuality, dementia only affects the brain, not anything else. And of course there are other people of his age who "have all their marbles" but are incapable of moving around independently...