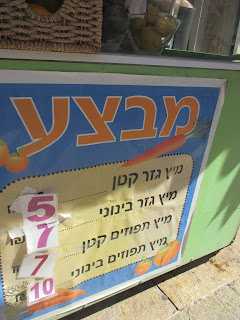 There's more to Jerusalem "Street Food" than felafel, shwarma, bourekas and ice cream. One thing I remember from my very first visit here in 1969 was the "freshly squeezed juice" kiosk. Even with the addition of more and more unhealthy foods and 5 Shekel snackbar/restaurants, you can still find an amazing amount of custom juice places with a wider variety of fruits and vegetables for your juice, custom-made.

Way back when it was mostly orange, apple and carrot, but today you can get lots more. 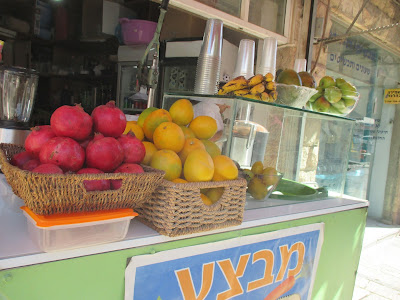 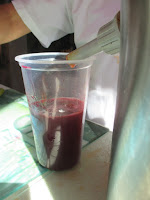 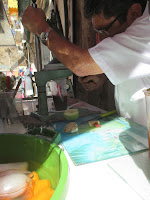 The other day, fighting one of those season-change colds, I decided to lunch on a healthy "medicinal" juice. I went to a kiosk my son recently took me to on Rechov Agripas, just off of King George Street and asked for pomegranate and ginger. The "juicer" -what does one call a person who runs such a business?- told me that with the powerful ginger, I need to add either some apple or carrot juice. I chose the carrot, which is also chock full of vitamins.

I took his largest size cup, which cost me NS25, lots more than I would have spent on a felafel or tuna sandwich. But I wanted something to help flush out or scare away whatever virus had been plaguing my body. 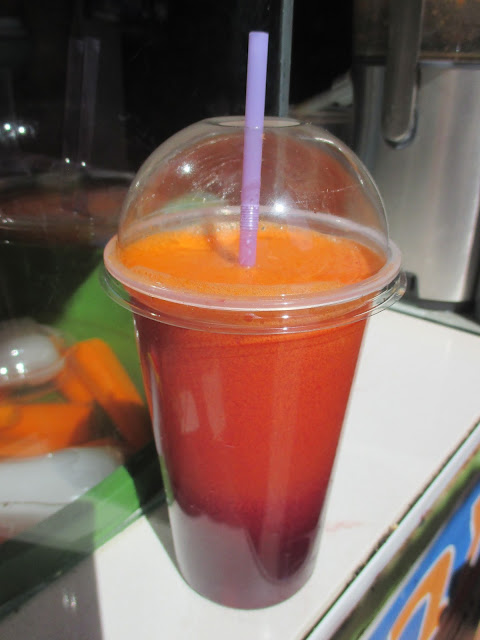 It had a nice powerful taste from the ginger, was refreshing and filling. Just as it was almost ready for drinking, a passerby took a look and asked for exactly the same thing without even knowing what I had in it. Actually, he was an American, and I needed to translate for him. I hope he enjoyed it as much as I did.
Posted by Batya at 10/27/2016 07:39:00 AM