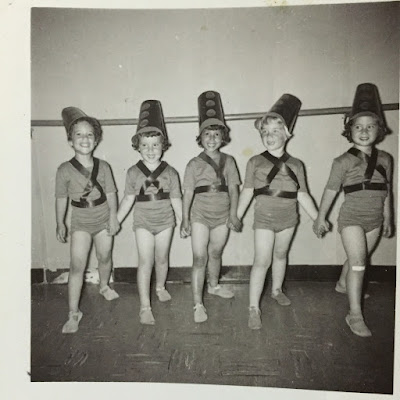 I started to go to dancing school at the age of three. There was a woman, a Mrs. Sullivan, if I remember correctly who had a "dancing school" in her tiny basement. Classes were small, and at the end of each year there was a large recital in the local school, P.S. 46. Bayside, NY.

Each class performed and we had costumes as you can see here. The year of this picture we were "toy soldiers" if I'm not mistaken. From the shoes, it must have been when I was four or five. I know the names of two of the other girls. One is my friend Lisa  who writes about her mother on Alzheimer's - My Mom My Hero. Our parents were close friends for maybe half a century. We were friends and neighbors when we were little and then became nextdoor neighbors as teens and then lost contact until reunited not long ago, when I found her on facebook. The girl next to me is Margaret (Margie) Gruen (at least that was her name when we were kids.) We haven't been in touch for more than fifty years. I have no idea what has happened to her, and I don't remember the other girls at all.

This picture brings back so many memories, especially of how much I have always liked to dance.

On the far right?

on the far left perhaps?

I have no idea who sara g is, but that last comment was from me, Jessie