The other day when I had a hankering for some vegetable soup, I made a few changes. I added lots of fresh ginger and some real pepper, as you can see from the photo. Then when it was almost ready, I also put in some chunks of pumpkin. That's because the pumpkin cooks very quickly.

That's besides the usual: 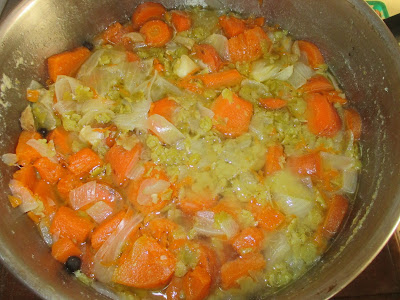 It was all cooked up with some oil and boiling water (to save time,) until the carrots were soft. Then, since it was already getting pretty late at night, I had a bowl of it very hot and left it to cool. In the morning there was hardly any liquid, as you can see. You should always calculate for food to continue cooking after the flame/heating element is off. Just keep the pot or pan covered, even put a towel on top if there is no flame on. Or put it on a surface that keeps the heat. Flavors get stronger this way and no burning.

Then I put it away in the fridge. Later in the day I heated some up, and it was much better than the night before. 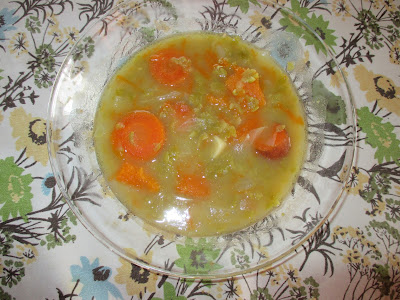 I'm getting temped to get one of those blender sticks to make these soups blended and creamy-like. It would be a nice little present for winter soups.
Posted by Batya at 11/05/2016 06:23:00 PM