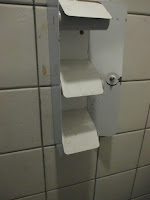 MEGA B'IR מגה בעיר is one of Israel's supermarket chains. According to the news, it has been struggling financially of late, but that's still no excuse not to have toilet paper in the WCs public restrooms. A few days ago, I was near their Arnona-Derech Hebron branch and rather desperately needed "facilities," which are called שירותים Sherutim, Services, in Hebrew. There is also a "TEREM," Medical Emergency Center nearby, but I wasn't in the mood for getting past a medical receptionist by saying:


"At my age needing a toilet is an emergency."

I've discovered and reported that quite a few of the Supermarket chains here in Israel have perfectly proper and well-kept, well-supplied public toilets, so in this fancy neighborhood I was pretty confident that the "services" would be acceptable. 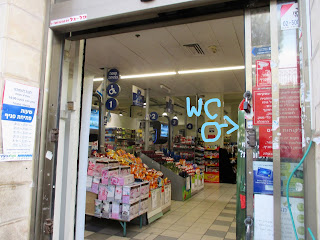 Actually, I was very optimistic, because at the entrance I quickly noticed the sign they had pointing the way to the WCs. I didn't have to waste any time asking workers. I quickly followed directions, plus an additional sign to the very back of the store. I should have been wary when I found myself walking through the same sort of clear heavy plastic "curtains" that they have in the Shaar Binyamin Rami Levy to the "workers only" area. But I was too much in a rush to turn back. 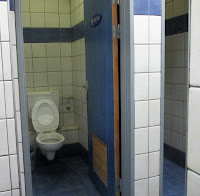 I entered an area with three doors, each to a toilet. One was labeled "Handicapped," one said MEN and the other nothing. None were lit inside, and none had toilet paper. I entered the "unlabeled" stall and a discovered a suspiciously wet floor, but it was too late to turn back. Luckily I had some tissues in my pocket. And I must admit that it didn't smell. 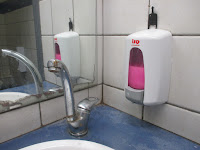 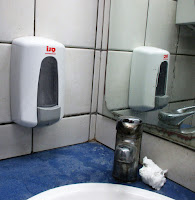 Surprisingly, one of the soap dispensers was actually full. That was a relief! But, you guessed it, there weren't any paper towels.

If any of you frequent that supermarket, I'd appreciate updates. But in the meantime, unless I hear of serious improvements, I'll have to check out the TEREM nextdoor.

Nearby Beit Hanatziv, on Derech Hevron, has accessible and, in my experience, clean public restrooms. Entrance next to Agvania pizza restaurant.

Will try but did not have time to search.

The building on the corner (where superpharm is) has public toilets - through the main entrance, past the guard, and to the right. I've never been questioned and it's been clean and had paper and soap whenever I used it.

Thank you, that's good to know.