Yes, this was another amazing "like in the movies" game. Do the IFL's Jerusalem Big Blue Lions play any simple wins? 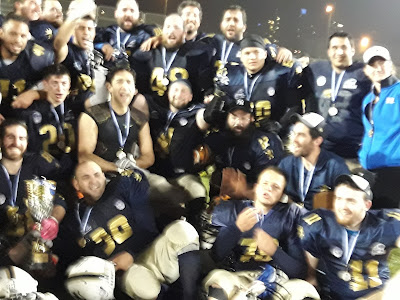 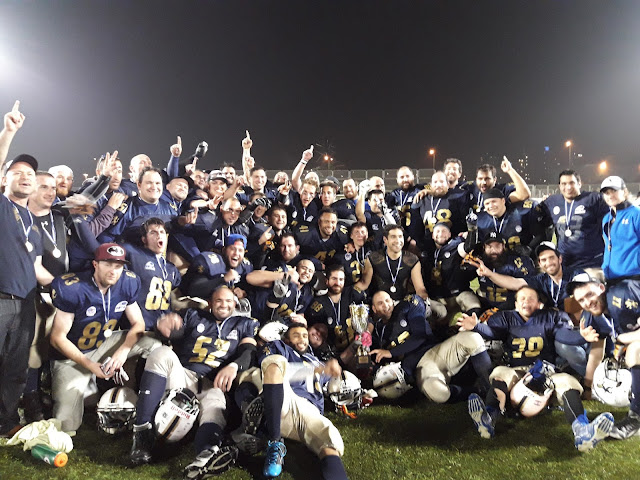 Besides the game's first touchdown by veteran star player #41 Binyamin Schulz, Big Blue was behind the entire game. That is until the last minute or so, when it skillfully clawed its way up to the same score as the Tel Aviv Pioneers. In that alone it made history. Never before had there been a need for overtime play in a championship game.

Suddenly there was something magic on the field. Big Blue fans crowded up close. The Pioneers somehow shrank; their fans were silent, in shock. We could all taste the impending victory. This past season, Big Blue had pulled off quite a few fourth quarter wins, and they got stronger every second. Lions for sure!

The Pioneers didn't know what had hit them. Just over a month ago, they had defeated the Lions, breaking the Lions' season long winning streak. Throughout the championship game, it looked like the Tel Aviv Pioneers would do it again. But there isn't a team in the League with the ultra-marathon mental toughness of the Jerusalem "Big Blue" Lions.

The game opened with the singing of Israel's National Anthem, Hatikvah, The Hope, which  ends with the word Jerusalem-Yerushalayim. It was very fitting, because in the game, the Jerusalem "Big Blue" Lions certainly had the "last word."

PS Praise goes to the Head Coach, who happens to be my son, Baruch Hashem, bli eyin haraa. He may possibly be the youngest Head Coach in the league, but it's obvious that he's the best!
Posted by Batya at 3/31/2017 08:42:00 AM