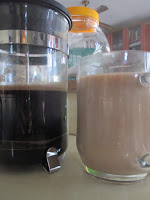 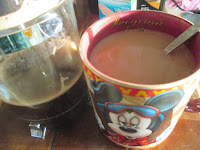 I'm at the very tail-end of my American coffee, which I use in my French Press, so since I had a bit of time in Jerusalem yesterday, I decided to try to buy some freshly ground coffee.

Maybe I'm crazy, because the last time I bought some it was much too powdery and fine even though I had requested:


"as coarse as possible for use in a French Press" 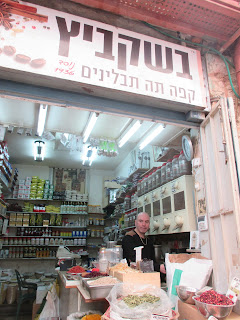 So, this time I'm pretty sure I went to a different place. Most of the coffees were NS10 ($2.75) per 100 grams (3.5274 ounces). This was at Bashkovitz בשקביץ which is a very well-known and popular coffee and spice store in Machane Yehuda.

I asked for a "sample" to feel, but he refused. Grrr... I really wasn't in the mood to go from place to place, so I asked him to grind up 200 grams of the Kenyan coffee. Then he gave me the bag, and of course the coffee felt much too finely ground, nothing like the American stuff. And I told him that.


"All the Americans come here to buy for their French Press," he insisted.

I hope he's correct about it being the right consistency. It does smell pretty good. I'll probably try another place next time. The Israeli Turkish coffee is OK in the percolator, but with the electric hob we're using now, it takes eons to boil and perk.

Gd willing my new French Press, which has a better filter/press will make a difference and the coffee will come out well. I will let you know, so in the meantime we're all in suspense.

French Press coffee should be pretty coarse. The scale in my mind is:

A more important point is that if the vendor is not cooperative, I'm certain that Jerusalem is filled with coffee vendors. Vote with your feet.

You could, of course, (coarse?) always get a grinder.

Everyone keeps tellin me to get my own grinder and then just buy the beans. Since I do reviews here, I decided to give him a try.