Israel, like many modern countries has screens by the bus stops which indicate when the various buses should be arriving. Granted that they aren't always accurate, but they are sure better than just guessing. 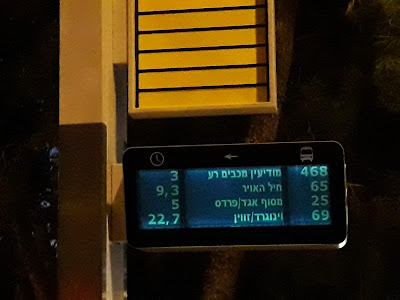 Not long ago, I had complained that the bus stop I use frequently to catch a bus in the direction of Shiloh didn't have one of these. It's the stop on Sderot Eshkol by Ammunition Hill. Over the past few months, I had seen signs of potential construction, but since it just wasn't happening I almost gave up.

Davka, today when I got to the bus stop, I saw that it was up and installed.