My friendly beer mavin, Doug Greener, has finally released the results of our Stout Beer Tasting, and I was certainly surprised when we discovered the names of the craft beermakers. I'm not a real expert, not even close, but I do like beer. I actually like it better than most wines, but we don't serve beer, since my husband doesn't drink it. Also, here in Israel beer is pretty expensive, yes, even compared to the lower priced (which I buy in Rami Levy which has good prices) kosher wine.

One of the things we were told to pay attention to was the height of the beers' head and compare the various ones. Of course, for us judges, they are simply numbered, and we had no idea which companies' we were drinking. 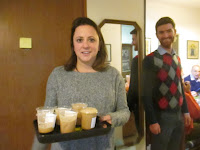 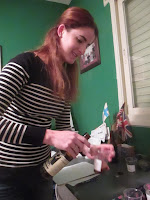 Doug is in touch with various Israeli craft beermakers and always has something new for us. Also, although some of us judges are regulars, there's always someone new.  We all try to help Doug and his wife Trude as much as possible.


I have no doubt that you're curious about which Israeli stout beers we liked the most and which we didn't like at all. That is the point of this post. I wouldn't want you to waste your money when you buy Israeli beer, which is not cheap at all.

As I alluded to in the title of this post, davka, the biggest companies came out with the worst stout beers. And this time, the panel was all in agreement as to the two best and two worst of the six. That surprised me even more than our results.  So, it's not a matter of any basic disagreement among us. All of us tasters agreed on those very basic rankings. It hadn't happened in the previous tastings I had participated in when the same beer could be in the top or bottom two according to different judges.

Now for the drum roll....
So, if you're wondering what to bring me, now you know! Thanks to Doug for another wonderful experience and tasty, refreshing evening.