The Saga of The Missing Bus Rides

Can this only happen to a Baile Rochel? 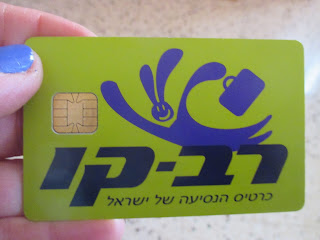 For someone who of my generation, knows nothing of computer/internet technology besides how to turn the various newfangled machines on and off, I still haven't a clue how a little card like this is the same as money when I travel here in Israel. I don't know how it usually at least pulls out/credits the right sort of fare and knows how long since I first got on the train or bus. 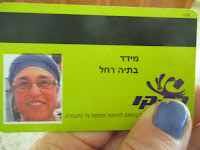 To me it's still science fiction in action when if you lose one, you can go to an office which has a computer program which can reproduce your account, so you don't lose money. You do have to pay a bit for a new card, though. And a couple of years ago, I discovered that the "paying machine kiosk" by the lightrail can show you how many rides and "packages" of rides the card is "storing."

When I first started using the Rav-Kav, רב-קו, I was always very nervous about being on the lightrail and discovering that it was empty. There's no place to pay on the train, and if an inspector comes on to check before you manage to get off to pay, you're fined a lot of money.

That's why I kept refilling the card with packages of twenty 20 rides long before I had finished a package. The card isn't all that smart. It doesn't finish a package before starting a new one. When I began to check I'd find three or four packages being billed. It would say something like:

I quickly got into the habit of checking, and then from one day to the next I was horrified to discover that the full package of "20 rides" had disappeared!!! Nobody had an answer for me as to where they had gone. I figured that some computer geek had hacked my account and stolen them.

A few months after that I began to get suspicious about the fact that rides seemed to get used up too quickly. Then I discovered that sometimes instead of getting the free within 90 minute transfer, the bus or train had billed another "package." After that I made a point of getting to absolute zero before buying a new ride package of 10 or 20 depending on how much cash I had to pay the driver. Yes, I had stopped trusting the machine by the train.

Last week I knew that I had reached zero on my previous bus ride, so when I got on a bus I was ready to pay. The driver was nasty and told me to put my card on one of the machines in the bus, since he didn't want to waste time. But I insisted that there was a good chance that I'd have to give him cash for a new "package." I put my card on the magic surface expecting a red light to flash indicating "empty."