The other day I bought some apricots in Machane Yehuda Market. They were a good price and were delicious, but that meant that some, especially by the time I got home a day and a half later, some were too soft. I did keep them in my friend's fridge, but they are a very delicate fruit. I had to quickly figure out what to do with the soft ones. So... 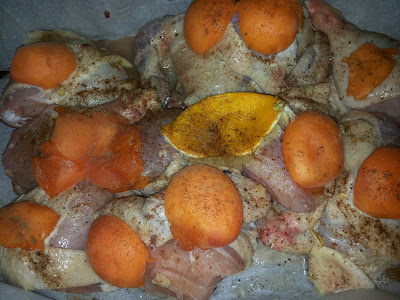 I cut (with my new poultry shears) the chicken up for baking and placed them on baking paper on a heavy pyrex-like baking pan. Then I sprinkled some nutmeg, cinnamon and pepper. I squeezed lemon, leaving the rinds on, too. And then I opened and cut and checked the apricots (for infestation) and placed the halves on the chicken.

Then I baked it all in a hot oven until ready. Sorry, but my oven doesn't have an exact temperature knob. Also it's hard to time, since it depends on how large the pieces are and how hot the oven. I cook by smell and sight. When it starts smelling ready, I check, and then when it looks pretty ready I turn off the oven or take out the pan.  Years ago one of our ovens, when new, had instructions that said that every oven is different so don't go by exact timing.
Posted by Batya at 6/07/2015 05:30:00 AM