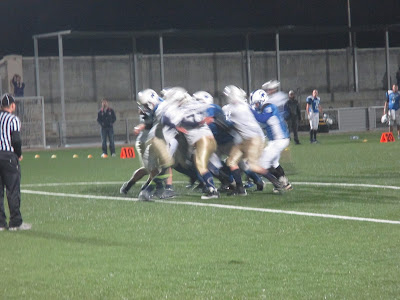 I must admit that I'm enjoying the football games more and more this year than ever before. As many of you know, I'm a loyal fan of the Jerusalem Lions "Big Blue" American Tackle Football team. I think that many of you, especially  parents will understand when you hear the reason. It's because my son is no longer playing; he's the coach. How's that? Am I allowed to brag? I do still come to cheer on the team. And if you'd like to see football here in Israel, I suggest you join us. The games are free. Bring your own nosh. The home games are in the sports field in Mishor Adumim. Click here for the schedule.

But the point of this post is to point out some of the really nice bits of sportsmanship and derech eretz, nice behavior you'll see at football games. I've seen them!  Quite often as the guys of both teams get up from one of those frightening to look at tackles, when they're all piled up on each other, they help each other up, not only their teammates, but the guy they had just tackled or who had been tackled by.  I really like the fact that most players at least understand that it's a game, not a war. When everyone plays fairly according to the rules, there's mutual respect.

Another thing that is very nice. When the play is stopped for an injured player, players on both teams, whether on the field or on the sidelines, get on their knee in respect, until the player either can walk off the field or is helped off, and then they all clap to thank him for his efforts and wish him well. 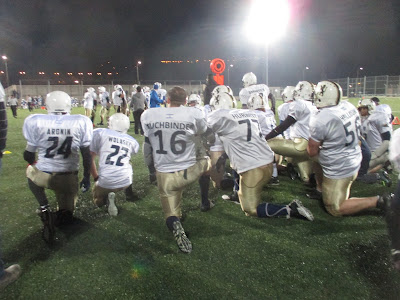 Yes, they all know that it's by the grace of Gd that it's not them needing help from the medic. And many of them have been in that position already. 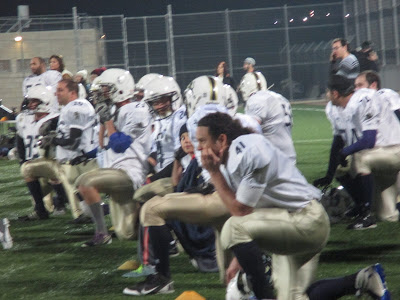 A BEAUTIFUL and moving post! I watched last night's game and was so very impressed. It was marvelous seeing players tackling opponents to merely stop them rather than injure them so that they'd be sidelined for the remainder of the game.True sportsmanship in the best possible way!

And, as I wrote on a FB post last night,"Nothing like ISRAEL! Watching the Israeli Superbowl. (My good friend Ruti Eastman's son Dani is the Quarterback for the Judean Rebels. Some other superb players are missing due to service in the IDF.)

The outstanding player of the opposing team was the MVP of the high school league.He is an Ethiopian Jew. American football in Israel played by a mosaic of players from many nations including Ethiopia. LOVE IT! ONLY IN ISRAEL!"

Yes we can be proud of our guys and Batya dear you can be very proud of your son, the coach of his team as I'm sure Ruti Eastman is of her son Dani and husband the coach of the Judean Rebels. BRAVO!

NG, thanks darling. When I try to translate "derech eretz" into English I use sportsmanship.