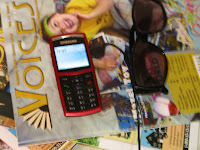 Chodesh Tov one and all.  This year we have one Adar but two days of Rosh Chodesh Adar.  It's supposed to be a happy time, but somehow my computers aren't cooperating in publishing this Havel Havelim.  I tried the method I used when blog carnival was down, but things change in Adar, and it didn't work.  Eventually, G-d willing, I'll have this posted on both my blogs, and I hope and pray that you intrepid jbloggers will post about and pass the links around so a maximum of readers will have the great opportunity to to read the posts from the humongous international collection of Jewish bloggers, jbloggers as we're known.
I've probably lost some posts along the way, those I added, because they didn't arrive via blog carnival, so if you can't find yours, please send it in the comments.  I'm pretty sure I caught all of the junk/spam they forwarded, if I missed something, please let me know via the comments.  And of course please feel free to write something nice in the comments if you think it applies.
Havel Havelim is the most veteran of the jblogger carnivals and probably one of the longest running blog carnivals there is. Blog carnivals are like "floating" internet magazines. They float from blog to blog, like "floating crap games," l'havdil.
Havel Havelim, the international jblog carnival, was established by Soccer Dad, and is now run by Jack. The term “Havel Havelim” is from Kohelet, Ecclesiastes, which was written by King Solomon, who built the Holy Temple in Jerusalem and later on got all bogged down in materialism and other “excesses” and finally realized that it was nothing but norishkeit, “havel” or in English “vanities.” I think that King Solomon and his father King David were the original "bloggers." The books they wrote, when you take them chapter by chapter, can easily be described as blog posts. The stones they used to write on made them last, so that we can read them now. I doubt if today's technology will preserve our words for so long.
There are two other jblogger carnivals, the Kosher Cooking Carnival and JPIX
which showcase everything about kosher food and picture posts with Jewish themes. If you're interested in hosting a KCC, please contact me.
Westbank Mama calls for pro-Israel posts. 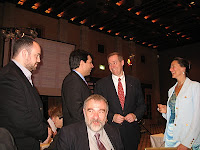 Lady-Light presents Shouting One Down: Better than Intelligent Questions?Tikkun Olam, saying, "(Please forgive me for the last-minute submission. I have an excuse...!)
Heckling on campus: the answer to "free speech."" posted at

Mimi presents Shuk: Nazareth in the Galilee posted at Israeli Kitchen, saying, "Walking through the Nazareth shuk was like visiting another country."
G6 presents The KAJ - Breuer's Bris Milah Menorah posted at Guess Who's Coming To Dinner.
Neil Fleischmann presents Mr. Rogers Goes To The Senate posted at NY's Funniest Rabbi.
Yosef Greenberg presents A New Face on the Grandfather Clock posted at Yachdus, saying, "Trends in the Chareidi marketing, especially relation to the Internet."

Yosef Greenberg presents Thank You David Ben Gurion For Spreading Torah Learning posted at Yachdus, saying, "Why is there so much Torah learning in Israel?" 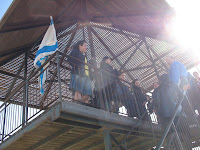 Lady-Light presents Honest Questions about Israel and Palestine posted at Tikkun Olam, saying, "If people admitted the truth about the history of how Palestine became Israel, and the role of the Arabs in that history, they would see that the Arabs and British are to blame for the state of the Middle East today."

SnoopyTheGoon presents Ahmadinejad discovers Avatar posted at SimplyJews.
Ciaran Blumenfeld presents The Tastemaker Challenge: Show me the Kugel!Momfluential Media, saying, "Thought this was a funny post about a recent blogger potato challenge - they left out the Jews! Must have been afeared of our Kugel." posted at

Devo K presents Weather or not... posted at In the middle, on the right.
Joel Haber presents When a Handshake Isn’t Just a Handshake posted at Fun Joel's Israel, saying, "Based on a response to the post I included in last week's Havel Havelim."
mother in israel presents Wedding Costs posted at A Mother in Israel, saying, "Part of a series on Israeli weddings in the religious community."
Batya presents The New Israel Fund and Planting Seeds For The Future posted at Shiloh Musings.
Jacob Richman presents New Israeli Educational Stamps Posted Online posted at Good News from Israel, saying, "Thanks!
Jacob"
Sharon A presents Water, Water « The Real Jerusalem Streets posted at The Real Jerusalem Streets's Blog.
harry presents Fact and Fiction: Beit Avi Chai launches film series posted at Israelity.
harry presents Listen to the music posted at Israelity.
harry presents Super group jams in Jerusalem posted at Israelity.
Ben-Yehudah presents Good News! ...But Not Really That Good posted at Esser Agaroth.
Joel Katz presents Religion and State in Israel - February 8, 2010 (Section 1)Religion and State in Israel. posted at
Joel Katz presents Religion and State in Israel - February 8, 2010 (Section 2)Religion and State in Israel. posted at
Ariel Ben Yochanan presents Israel Is Anti-Jewish posted at The Torah Revolution, saying, "B"H - Israel is the only country in the world today who's regular army engages in distructing synagogues and harrassing its Jews."
Yisroel presents Snow "State of Emergency" Best Thing to Happen posted at Artzeinu.
SnoopyTheGoon presents The Point of "No Return" posted at SimplyJews.
Joel presents Oren Smiles at J-Street: So? posted at The Israel Situation, saying, "My weekly addition to the Israel Situation. This week, we discuss Michael Oren and J-Street"
Soccer Dad presents Israel Adds Cyber-Attack to IDF posted at Defense Tech.

Paul Kipnes presents I Almost Made Myself Cry at the Bar Mitzvah posted at Or Am I?, saying, "A Bar Mitzvah of a special needs child brings tears all around."
Soccer Dad presents Snow Thoughts posted at JewishByte.info Baltimore's Jewish Byte - The Daily Site for your Jewish Byte, Jewish News, Baltimore Jewish News, Baltimore Jewish Info.
Soccer Dad presents Bernard Lander, ז?ל posted at Cross-Currents.
Heshy presents The Na’vi Makes a Prophecy: Judaism in�Avatar posted at Frum Satire.
ProfK presents How a Knowledge of Vocabulary is Going to Save the Yeshiva System posted at Conversations in Klal.
Suzy presents LETS PUT SOME JOY IN IT tip for parents and teachers posted at A bit of Light.
Hadassah Sabo Milner presents Tznius Question posted at In the Pink.
Hadassah Sabo Milner presents Teens and Purim Drinking posted at In the Pink.
~JP~ presents Shabbos Practices posted at NGOmeter, saying, "My (almost) weekly Jewish post that relates to NGOs @NGOmeter. Thanks for putting in the work this week!"
Lady-Light presents Another Jew comes Back to Tradition posted at Tikkun Olam, saying, "(Batya, please choose the 3 posts of mine which you like the most). I always love these stories of secular Jews returning to the fold; it warms the cockles of my heart...!"

Bored Jewish Guy presents Guys have feelings too posted at Bored Jewish Guy.
Rahel presents My Audition Adventure posted at Elms in the Yard, saying, "What happens when a middle-aged American expat auditions for Kochav Nolad? Find out...."
rutimizrachi presents Amazing, but true. posted at Ki Yachol Nuchal!, saying, "G-d was clearly teasing me. Yes, He does have time to play jokes on people, even while He's busy with maintaining Creation. He's G-d, after all..."
I've also discovered that it's best to just go where G-d sends us.
Soccer Dad presents Notice to Friends and Followers of Joshuapundit posted at J O S H U A P U N D I T.
Lady-Light presents My Virtual Family posted at Tikkun Olam, saying, "Thank you--I love you all!!"


And here's more in the saga of my caring for my very elderly father, are all these expensive aids a scam?

Lady-Light presents Afraid to Name the Enemy? Take it Away, Latma TVTikkun Olam, saying, "This is under "politics" because of political correctness, the prevalence of which, in the United States, is preventing it from seeing the truth and acting accordingly.
It's also funny--especially that American Hebrew accent!" posted at
Robert J. Avrech presents Michele Bachmann: “America Will Be Cursed If We Reject Israel.” posted at Seraphic Secret.

Batya presents The Ten Commandments, "No Other G-ds" Includes Democracy and Other Western Idols posted at Shiloh Musings.
Binyamin miller presents FNQ – 5 q's for the Week - Controversial Stories in Tanach posted at Fear No Question, saying, "5 questions on how to deal with sins of Biblical characters"
Mordechai Torczyner presents The "Seventy Faces of the Torah" FallacyThe Rebbetzin's Husband. posted at
Josh Waxman presents The Samaritans make Yisro bow posted at parshablog, saying, "It is a general feature of the Samaritan Torah that they "fix" the text to solve difficulties. This is something to keep in mind if you would think to rely on a Samaritan variant as preferable to the Masoretic text. Three examples from this week's parsha alone. They make Yitro bow to Moshe; they make the nation hear the sounds; and they emend Har Eval to Har Grizim, which they deem holy. There are others. Also, Ibn Ezra argues against Lower Biblical criticism."
Josh Waxman presents Charoses and the authenticity of the Zohar posted at parshablog, saying, "If named Tannaim or Amoraim mentioned in the Zohar think the tapuach is the apple, but according to true Chazal the tapuach is the citron, then how could the Zohar be anything other than a forgery?"
Yechezkel presents Ad K'dei Kach - The Ten Commandments Revisited posted at Achas L'Maala V'Sheva L'Matta, saying, "Looking at the Ten Commandments from a new perspective. It's deja vu all over again."
That concludes this edition. Submit your blog article to the next edition of
haveil havalim
using ourcarnival submission form.
Past posts and future hosts can be found on our
blog carnival index page.
Share
|
Technorati tags:
haveil havalim, blog carnival.
http://blogcarnival.com/bc/tb_34458.html
http://rpc.technorati.com/rpc/ping
http://accreditedonlinebiblecolleges.org/2010/top-50-biblical-history-blogs/trackback/
http://funjoelsisrael.com/2010/01/when-a-handshake-isnt-just-a-handshake/trackback/
http://israelity.com/2010/02/09/fact-and-fiction-beit-avi-chai-launches-film-series/trackback/
http://israelity.com/2010/02/07/listen-to-the-music/trackback/
http://israelity.com/2010/02/04/15043/trackback/
http://www.jewbyte.info/02/snow-thoughts/7672/trackback
http://www.cross-currents.com/archives/2010/02/09/bernard-lander-%d7%96%d7%9c/trackback/
http://www.frumsatire.net/2010/02/10/the-na%e2%80%99vi-makes-a-prophecy-judaism-in-avatar/trackback/
http://haloscan.com/tb/rahel/1912275825059586458
Posted by Batya at 2/14/2010 07:30:00 AM

Great job, and chodesh tov to you and your family!

Thank you and chodesh tov!

Danke schoen for the post! Hope to hear from may of you. :-)

amen! I trust that people will visit the blogs, G-d willing.