Just Past The Third "Birthday!" 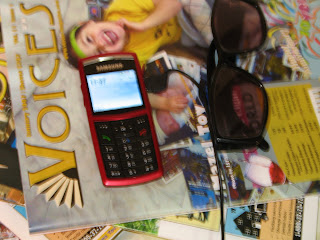 It's hard to believe this, but my "new cell phone" has just past its third birthday, a milestone for Israeli cellphone deals.

This has never happened to me before.  My phones have always died before the 36 month initial purchase contract was up.  And now with the new laws we had to make a new contract so I'd be covered for basic things like caller identification, voicemail etc.

I was with my daughter (#1) when I bought it and it's more expensive and has more "abilities" than I would have gotten on my own.  Honestly, I've used, taken advantage, of almost none of them.  What I do like is the easy to find color and its weightlessness.

I negotiated a cheaper deal, a smaller package, and now I don't have to pay the 1/36 purchase price each month either.  So, that should save me a bit more money, G-d willing.

So you were also able to get a brand new phone for free?

November hubby and I went in to see about getting new phones and renegotiate our package. We'd past the 3 year mark and the phones really needed to be replaced. We had totally no frills stuff, no camera, no internet and were quite happy.

When we got to Orange the woman we spoke with told us we were eligible for new phones - free of charge. Basically they upgraded us to 3G (or is that G3?) phones - cameras (Cybershot 3.2 mpxl deals) and internet. And we renegotiated the contract... oh and we were told we could get new phones in 18 months.

I mentioned getting the phones free of charge to a friend who has a very sad and worn out looking phone. When she and her hubby went to renegotiate (same company but different branches) the guy they spoke to told them there was no way they'd get a free phone...

So I'm curious if you got the phone for free and which carrier you use.

Pesky, nothing free. Bli eyin haraa, the phone still works. All we did was reduce (as my husband commented) my deal, since I'm home most of the time and don't need the cell phone for so many calls.

Which store gave you the deal?

My son is opening a business and made a great deal with a different company. That means that both sons are no longer in our family plan which makes things more expensive.

You know what's sad? I have had my cell phone for about 6 years, and can barely figure out how to work it. Oy!

Hasya Ya'ara, very few people use all the internal gadgets. We overbuy. It's a scam. All I wanted was an easy to find phone and I ended up with so many things I'll never use.