I may be terrified, but I'm not sad about getting rid of my old kitchen. We've used it well for over thirty years. Kitchens aren't people. They are just kitchens, things.

I'm excited about getting a new kitchen. I'm terrified of the mess, the chaos.

I've been talking about getting a new kitchen for years. That's ever since I realized that there is no way I could get decent sized ovens in the old one. And I need two ovens.

The last time I bought a new refrigerator it was almost impossible to find one that could have the door hung from the other other side.

And did I mention that things got moldy in the corner closet and wet under the meat sink?

Yes, this old kitchen had paid its dues. Over thirty years is a nice age for a kitchen to be retired.

That phrase "get a new kitchen..." It's not very accurate. Because you don't "get a new kitchen," like getting a new coat or set of dishes. A kitchen must be planned, planned very carefully. And it isn't cheap. And the old one must be emptied and taken out. It's a process. It is neither easy nor cheap.

Gd willing in a couple of hours, we'll be on our way... 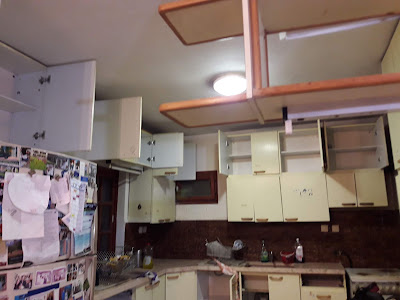 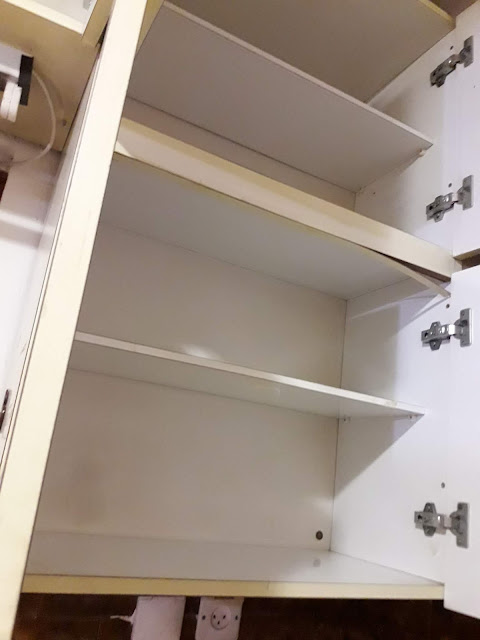 On second thought, my kitchen is basically along one not very long wall; one large sink (we don’t cook/eat dairy), an oven so close to the floor I don’t use it (I hate bending down to bake). The kitchen was opened up to the dining/living room, in the style that was prevalent back in 2010 when we moved in straight from the airport (on aliya). In order to expand my kitchen to accommodate my eclectic chef, I bought two beautiful white bookcases with glass doors. They hold all my “gourmet” items and they're a visual work of art.

Hopefully it will all be done within a couple weeks, in time for Rosh Hashana. Hatzlacha Raba.

Wonderful storage idea. A kitchen cabinet can be anything.