The other day I discovered a bag of almost totally frozen cucumbers in the back of the refrigerator. Even though here in Israel, cucumbers aren't all that expensive, I still didn't want to throw them out. You must have heard the saying:


If life gives you lemons, then make lemonade.

So, I took those frozen cucumbers and made pickles!

I made the pickles the easiest and quickest way possible. I don't measure. I just cut, poured and sprinkled. 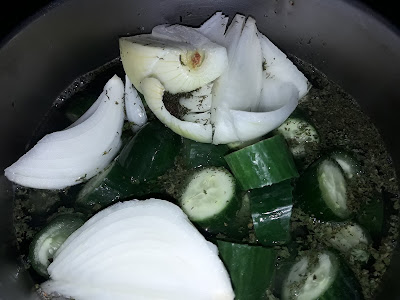 I brought it to a boil and then let it simmer over half an hour. After it cooled I stored the pickles in a glass jar in the fridge. 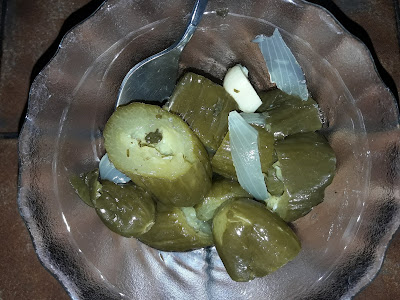 My husband even agrees that the pickles taste fine. And they don't have that over-salty chemical taste you frequently find in store-bought pickles.

If you're on a low salt diet, you can make low salt pickles at home. Get the flavor from the onion, garlic, dill and vinegar.

Another advantage to the cooked pickles is that they just take a couple of hours from beginning to eating them. And don't forget that if I hadn't made pickles I would have thrown out the cucumbers.
Posted by Batya at 8/01/2018 09:41:00 AM

Thank you Batya for your pickle recipe.

could you say how much garlic one should use.

todah...
Gd bless you and yours.

I used about 3 or 4 pieces, not the full garlic.

This looks great. Thanks for the recipe. Think I’ll try it. I like the little kirbeys so I’ll do them whole.

Tell me how they come out. If you like sweet sour then add some sugar.