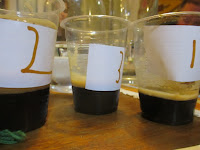 Last week I discovered a great healthy, tasty nosh. For me it was better than salted nuts or candy. I had dropped into a supermarket to buy myself something that could be my "dinner" at the beer tasting. We all know that beer isn't all that low in calories, though beer tasters aren't given all that much to drink of each beer. This is really as much as we get of each beer.

I had thought of buying a perfectly ripe avocado, but there weren't any ripe ones for sale. They were all as hard as rocks. I wanted a protein and couldn't have dairy, since I had eaten a late fleishig/meat lunch. Then I spied these sprouts. At first I thought they were like the sprouted lentils I've bought and loved in Rami Levy. But it was only when I opened the package and began eating them that I realized that there are all sorts of sprouted beans and legumes. They were a real treat and totally delicious. 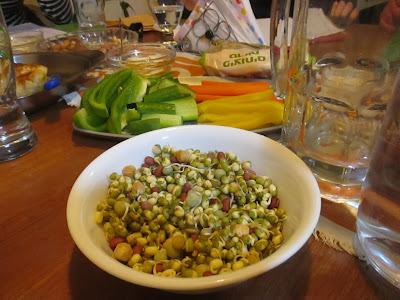 I wasn't even tempted by the more fattening things on the table, like the bourekas, but I did eat the salad and some other bean-type thing that someone had brought.