Last night was "motzei Shabbat Nachamu," a traditional time to attend musical events, after the first Shabbat after the Three Weeks. So I didn't blog and I skipped seeing C.S.I. I went off with some young neighbors for a cultural adventure.

First stop was the nearby city of Ariel, the Moscow of the the Shomron. How could I resist the chance to hear the "Beatles" so close to my home town Shiloh? OK, "Beatles music," but even that was stretching it. 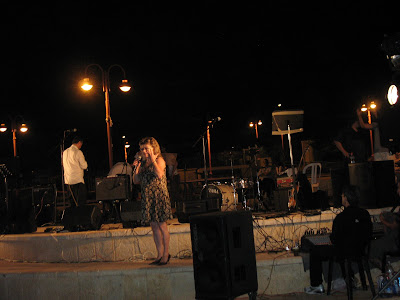 Unfortunately, I have a very good audial memory, and the Israeli band's version of the Beatles was far from the sounds and arrangements permanently burned in my brain. It wasn't even the lead singer's atrocious Hebrew accent which totally damaged the lyrics, the drummer's drum set was inadequate to even give him a chance to reproduce Ringo Starr. Probably the most blame could be humped on the guy controlling the sound. The mix was totally out of whack and proportion. We couldn't hear one of the singers. It may have helped if he had lowered his mic so his mouth, rather than eyes would reach. The guitars, at least one, was much too loud.

For someone of my generation, who remembers vividly when those songs were new, when they were released, it was especially difficult to call this performance acceptable.

We heard lots of Russian around us and some Hebrew. Ages were mixed. I think that I was the only one of my age and background, so maybe others enjoyed it more than I did.

One thing for sure is that the park in Ariel, where it took place, is gorgeous. Mayor Ron Nachman certainly knows how to build.

Next we went off tho Tapuach, which advertises Saturday Night Concerts and promised a spectacular one for last night. Apparently the plan was to "concert" all night and according to Yekutiel Ben Ya'akov drive out first thing in the morning to Har HaBayit, the Temple Mount.

We left after midnight, during the performance of their first "star." I'm not sure of his name, but he was more professional than the faux Beatles. There wasn't much of a crowd, at least in the "Women's Section." Things seemed to be livelier on the men's side.

I got a peek at the rebuilt synagogue in the hilltop neigborhood of Tapuach where it took place. 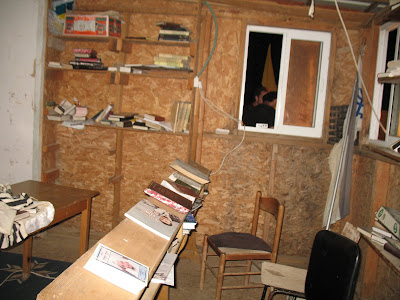 It seemed like most people were prepared to stay much later than we were. 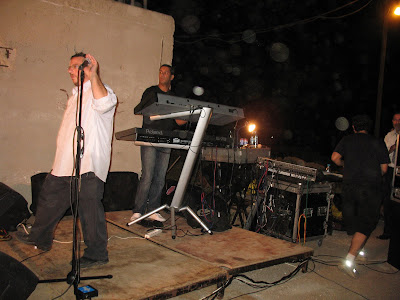 There were books, t shirts and nosherei for sale, too.

I know that I sound terribly critical, but I did have a good time away from the computer. If one doesn't experience life, what's there to blog about?