It's Not Thanksgiving If It's Not At Aunt Pauline's... 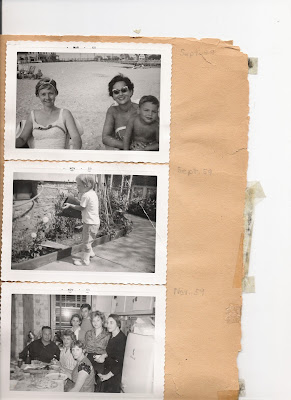 These are pictures from my old album, the photo album I made when I was in the Sixth Grade or younger.  I took the pictures.  They were taken with whatever cheap, simple camera a little kid, or even an ordinary family, would have had in the middle-late 1950's.  Those with "good eyes" will see that I still take similar pictures in terms of simple composition.  I do like to photograph anything and everything wherever I am.

But this is about Thanksgiving and family...

The lower-most picture was taken on Thanksgiving decades before many of you were born.

But for me it's only Thanksgiving if we're at Aunt Pauline's tiny one bedroom apartment.

We've only "celebrated" Thanksgiving once since our aliyah in 1970.  A neighbor decided to organize a large dinner together.  It was great fun, but it wasn't Thanksgiving for me at least.

Aunt Pauline was once of my mother's four older sisters, the third of the three daughters my grandmother had with her first husband.  My grandmother was a poor widow with three daughters when she married my widowed grandfather with two sons, who were the same ages as her younger daughters.  Together they had four more children, three girls and a boy, not in that order.  My mother is second to youngest.  Only she and her younger sister are still alive.  You can see many of the same people in the group pictures in this blog's banner.  Also, Aunt Florence from Far Rockaway is in the uppermost picture here and in the table picture in the banner.

All of Aunt Pauline's apartment was as crowded as this kitchen scene.  Food was also eaten in the bedroom.  For me food wasn't the focus of these Thanksgiving get-togethers.  I loved observing my older cousins, watching and listening to them.  Everyone talked at once, and they were all very funny, at least the ones who could be heard over the roar of people.  I think that's pretty normal for large families.  We'd finish each other's sentences and have simultaneous multiple conversations; at least that's how I remember it.

We didn't sit around a formal dinner table.  I don't even know if she had one.  My aunt was a single-parent (divorced) and raised her daughter alone.  She wasn't the only single parent in the clan, but the others were widowed.  Yes, quite a large number of my cousins only had one parent by the time they finished high school and some were much, much younger when a parent passed away.

My aunts and uncles did their best to help their siblings and nieces and nephews out.  My father, who had a business as a CPA, hired a couple of my older cousins every year at tax season.  He was a surrogate father as best as he could be.  One followed him and became an accountant, too.

When I became religious and wouldn't eat traif, I'd eat someplace kosher first and then go to Aunt Pauline's.  One year Aunt Sadie, who lived at the time a short walk from Aunt Pauline, took me to the East Midwood Jewish Center's kitchen where we ate a delicious meal.  Aunt Sadie (Finkelstein) was the secretary to Rabbi Halpern and also did work for the caterer, which was why we were welcomed to the best food in the shul kitchen.  She appears in the table picture in the banner and is standing in the kitchen picture.  The following year I brought my husband (we were engaged at the time) and we first went to Aunt Rosie and Uncle Joe's apartment to eat.  Aunt Rosie and Uncle Joe are sitting at the table in the banner picture and she's also one of the children in the banner.

Then my husband and I got married, made aliyah and Thanksgiving wasn't on our calendar.  A few years later, Aunt Pauline's daughter began hosting the event in her large suburban home.  I understand that fewer people came, though there was plenty of room.  Most of my cousins have had to spend Thanksgiving with in-laws or moved too far away.  Now, if I'm not mistaken, the third generation, one of Aunt Pauline's granddaughters, has taken over hosting the family Thanksgiving dinner.

Thank you for sending me the link to your post. I know how you must feel-nostalgic, and yearning...even though you made a decision to make Aliyah, there is always something lost, in leaving family.

I don't have Thanksgiving memories from my childhood, but I have family get-together memories, when my mother's parents, and her siblings, my aunts and uncles (there weren't many cousins)got together for picnics in the park.

I am grateful that my sons' families, the little cousins, will grow up knowing each other. I can't even say, "together," because they live so far apart: one in Gedera, and one in Efrat. But they get together for some chagim, and just last Monday I Skyped with my older son at his place in Gedera, and his younger brother and family was there for dinner (malawach!) with his family--so the cousins did get together, and I saw and spoke to everyone.

LL, I do have wonderful memories of cousins on both sides. My children just don't have all that many cousins, but they do have some nice family memories, at least I hope so.