Presenting:
The Succot Edition!
89
and it's mine! 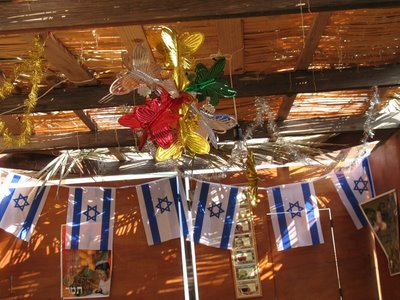 Yes, this is the 89th Havel Havelim, "kineina haraa." HH was instituted by the one and only Soccer Dad, to give an internet forum, "carnival," for Jewish and Israeli blogs.

Havel Havelim is hosted by a different blogger each week and coordinated by Soccer Dad. I highly recommend trying your hand at hosting it. Contact Soccer Dad, and choose a week. It'll be a couple of months until I'm available to do it again when on vacation from my "day job" as a teacher. That's when I usually volunteer, though if there are other teachers looking for a chance to spend some their vacations hosting hh, please do; be my guest.

The term “Havel Havelim” is from Kohelet, Ecclesiastes, which was written by King Solomon, who built the Holy Temple in Jerusalem and later on got all bogged down in materialism and other “excesses” and finally realized that it was nothing but norishkeit, “havel” or in English “vanities.” This being the Succot edition is just perfectly fitting, since the succah is the opposite of the overly luxurious life that King Solomon considered such "havel," vanities. It's more like the Tabernacle, our Mishkan, which was transported as we wandered through the wildnerness on our way to the Promised Land. Then it sat in Shiloh for 369 years. 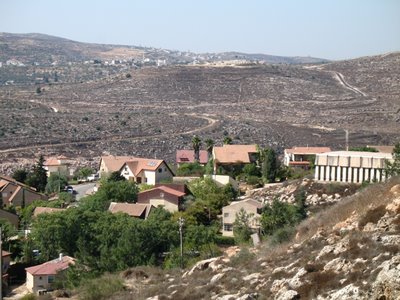 We've been celebrating Succot, one of the Jewish Holidays when all of the Jewish people ascended to Jerusalem to pray there. Here's a gorgeous night scene of Jerusalem by Israel At Level Ground.

Kashrut scandals are being revealed all over. Orthomom tells about chicken in the Five Towns.

Don Radlauer tells us a story about life in Israel which won't make it into the Nefesh B'Nefesh pr stuff, but my mother would tell you that it can happen in New York, too.

In Beyond Tshuva, read how Menachem Lipkin learned to learn. Also on BT, Michael Frankel gives us Yom Kippur Takeaway - Forgiving Others When We’re Slighted. And a guest on BT tells us that Happy Days are Here Again!

Mottel writes a Letter of Thought about dog treats.

Just before Yom Kippur, NY's Funniest Rabbi gets very serious about forgiveness. And then afterwards, reflects further, wondering how many "holy schleppers" there really are hidden in unexpected places.

Simply Jews writes about the changes Britain has made for Moslems.

Life in Israel is learning some unpleasant truths about Israeli life and the ruling party.

Reb Chaim HaQoton gives us a blogger's shiur about Yom Kippur and Succos.

Here starts Succot at Sarah's, after she gives us shades of white.

A Simple Jew offers us a guest posting about Rosh Hashanah in Uman.

Rafi G. gives us the low down about the lulav and etrog business.

And for something more cheerful, the ladies of Gush Etzion offer Ruth and Naomi!

"Only from" America, How American Jews Should Vote.

Emes Ve-Emunah offers an interesting observation about how Chassidic women dress, and he also gives more background about the owner of the "kosher" butcher shop, which scandalously sold traif.

DAG tells us a tale about two shuls.

Read about the "war of the generals" on Israel and the Sin of Expulsion.

Am Echad discusses the relationship between Israel and the Diaspora.

And read this about collecting s'chach. I'm sure there are easier ways.

The Balashon—Hebrew Language Detective is here to explain the word: regel. 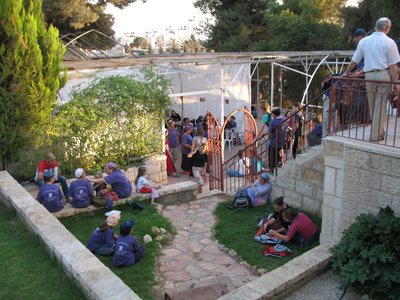 Take a look at Sarah's gorgeous succah! And then, like magic, look at this one, too and this.

Now, Yehuda gives us a drama for Sukkot; it's a great bit of entertainment for the kids at home or in Jewish schools. So make sure you save it for next year, since Sukkot is already over.

Ezer K'negdo reminds us to keep our priorities right.

My dear epal, Moze, blogged about something that's bothering me, too. We want to crochet/knit on chol hamoed. WE NEED TO...

Dry Bones got it just right, in his Succot cartoon.

socialworker/frustrated mom tells us about her Succot so far...

Daled Amos writes about Moslems and the Koran and their actual comprehension of it.

Here's some news from the muse's pics.

Israpundit asks: Will Israel Wake up One Morning to a Nuclear-Armed Iran?

And Smooth Stone asks: Has King David's spa been uncovered?

Cosmic X tells us where we can get the most accurate news reports.

Yaak gives us a graph from a survey about Israelis' belief in the moshiach.

DID THE ZIONIST JEWS TAKE SOMETHING FROM ARABS IN BRITISH MANDATE PALESTINE? By Francisco Gil-White, on Isralert.

Here are some joyful pictures from House of Joy.

Jameel complains about the service in Israel, which has its problems, but…

The Balloontwister reflects on the recent past.

Boker Tov, Boulder tells it like it is about Gaza.

Elder of Ziyon shows us a "Queer Rite of Jews" Amazing how others see us!

On the Fringe relates the Saga of the Vanishing Succah!

Reb Nati, of Mystical Paths, tells wonderful stories and starts to introduce us to a special woman, whom I know, actually. And from the same blog, we have Akiva and 68 years. Can you guess?

JoeSettler writes about Uzi Landau's plan to bring Israelis out to see Judea and Samaria. Actually that's what happened Oslo time, and we all know that Oslo pretty much faded away, until it was resurrected by Sharon/Olmert.
Sustainable Apple Pie found in Tel Aviv, a Pop-open sukkah. Oh Israel.!
The Thought Mill reports: 31% Of Canadians Blame Israel For 9/11
Learn about Better children through torah from Soccer Dad.

Do you agree that Succot symbolizes that we're princes, secondary to G-d the King?

A Simple Jews tells of a book I'd like to see.

There's some shocking news from the Jewish Blogmeister, Diapora Yeshiva's Avraham Rosenblum is an insurance agent! At least Ruby Harris is still fiddling for a living, though he fudges his childhood; he and my sister were not in the same class in Queens, NY.

There's a great cartoon posted by the olah chadasha in French Hill.

There are two things here, a 90 historical review of imperialism and some news about Natan Sharansky.

Baile Rochel entertains! Read all about it!!

And it we're talking entertainment, Renegade Kosher has the Bob Dylan doing Hava Nagila video. Good news for all. Renegade Kosher has volunteered to host a Kosher Cooking Carnival, probably the November one. Stay tuned… And don't forget to get me your kosher food posts ASAP! Now that this HH is out KCC is next, B'E"H!

The Sin of Expulsion reminds us of Bibi's sins, against the Jewish People, not the other ones.

Israel At Level Ground: Watch This Space: Israel and the future of video (Podcast)

Miriam wonders who else is Jewish.

Willow Green tells some everyday kind of stories about her kids growing up on a yishuv.

Daled Amos writes about the plans to build a synagogue on the Temple Mount. And he also helped me out with this announcement:
Daled Amos has worked together with Bagel Blogger who made an online banner out of a poster dedicated to keeping our thoughts of the 3 kidnapped Israeli soldiers alive. The banner can be viewed on both blogs. If you are interested in putting the banner on your blog, the HTML code is: http://static.flickr.com/91/266570794_22a6b2ee5a_o.gifThe original poster was made by Amcha, whose web site (http://www.amchacjc.org/) is not currently accessible. –thanks!

This year's Od Avihu Chai March from Shiloh to Jerusalem didn't quite end the way I had expected it to end... Though it really was wonderful. Here are some more pictures and behind the scenes...

The Zionistyoungster writes about the anti-defamation league.

Tikun Olam reports about the opposition to the latest UJC campaign.

Sultan Knish tells about the peculiar new movie, supposedly based on the Purim story.

Here are a few posts from my husband:
ancient mosaic found in Shiloh
Another Shiloh Antiquity - a Magen David
Jewish charities giving to Arabs

Am Echad writes about - - עם אחד: הרבה קולות: On Dissent & Criticism of Israel.

"It's time to go" is ready to give up two day yonitffs. When we made Aliyah I thought I'd never had to deal with a three-day marathon yomtov-Shabbat, when we were immediately hit by the only one that can happen in Israel, when Rosh Hashannah and Shabbat are one big—thank G-d for Tzom Gedalia—package!

A "must read" is the Gantseh Megillah, which is full of great articles. OK, it's not a blog, but it's Jewish, interesting, and some of the articles launch great posts…

From Israel Matzav: EU Parliament seeks closer ties with Syria
and Russia posts Muslim Chechen troops as 'peacekeepers' in South Lebanon and IDF preparing response to 'hypothetical' Syrian attack and What Teheran and Los Angeles have in common - it's more than Iranian Jews and Journalist faces sedition trial in Bangladesh for planning to visit Israel and Condi Rice does a James Baker imitation, more on that Rice's remarks to the American Task Force on 'Palestine': The more I read the sicker I get.

Here's a very good question from Carl Is the Golan different than Judea and Samaria? And another important question U.S. weapons to be transferred to terrorists?

A different question many are asking Will Lieberman Save Olmert? And here is a question of a different sort: Does the NYT write inaccurately about Israel due to the "man bites dog" syndrome?

I'm sorry, but I requested an earlier than usual deadline, since it's almost two weeks since the last edition of Havel Havelim, and next week I must prepare the 11th Kosher Cooking Carnival. A woman's work is never done! Your post Holiday posts will go to the 90th Havel Havelim—WOW! And if any of them are about kosher food—recipes, pictures, traditions, halachik issues, etc, please send them to me shilohmuse at yahoo dot com or via blog carnival ...thanks. Send your Havel Havelim posts here. If you're interested in hosting one—it's great fun, please contact Soccer Dad, and if you want to host a Kosher Cooking Carnival, I'm the address for that.

PS My source for new blogs and interesting posts, besides all of those submitted, were JBlog Central—vote for me! and jblogsphere.net. Shavua Tov and have a wonderful year!!

Thank you for such a wonderful post and all the pictures. I read your blog and tears run down my face.

Love to you and yours.

Vicki, thank you so much. It makes me feel that I'm not wasting my time.
Be well and enjoy!

I can see you have put a huge amount of time into HH89 - well done!

Great Job Batya, and thanks for the extra 'class' on Haveil Havalim and Shiloh's significance.

You care and attention shows as usual

BaleB, Thank you, my pleasure!

BagelB, Wow! x89 of course! and one for good luck!

Thank you for that blurb extraordinarie.

I like being included in these blog roundups & am grateful that I am, but I'd welcome characterizing this week's post a bit more carefully.

great job! thanks for the link