משנה מקום, משנה מזל
Mishaneh Makom; Mishaneh Mazal
Change Your Location (site;) Change Your Luck
So that's what I did. When I first envisioned this post about water conservation in Israel, I planned on illustrating it with this ad (which can be seen at the bottom of the post here,) but I couldn't find it online (internet.) I was also in a rush to leave the house to babysit, so I just posted a very quick post.
This morning I searched the newspapers until I found the ad, cut it out and scanned it. Again a failure in my attempt to post the ad with this later post.
What? Me give up? No way. So, a few minutes ago, I decided to "re-save" the scan in a different format, from bmp to jpg, whatever they signify. And to further the "place change," I decided to post it here on me-ander rather than on Shiloh Musings. 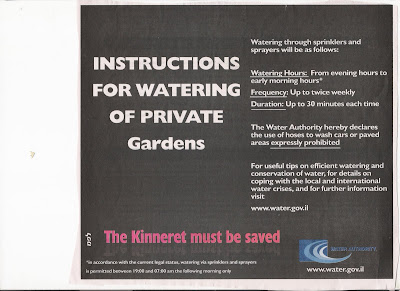