A New "G'mach" and Another Great Tremp Story

A g'mach is "free loan" society or a special low price "charity store."  It can be anything from donated wedding gowns, rented at under market cost, a clothing "store" with "symbolic" no profit prices, all sorts of equipment, such as medical or baby supplies, crutches or no-interest financial loans.  And I just discovered a new one, not far from Shiloh. 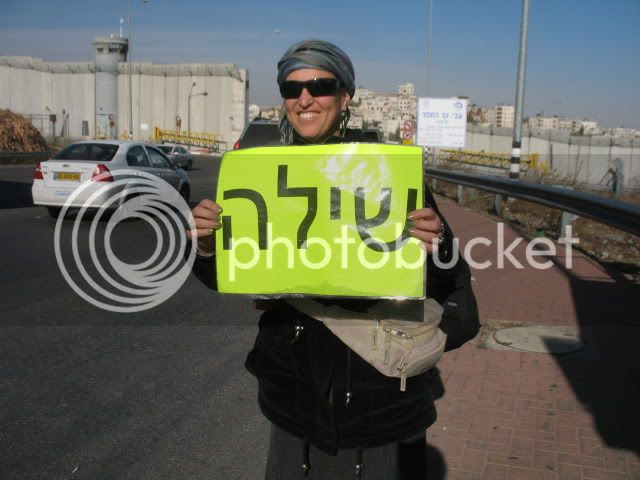 The sign I'm holding is from a sign g'mach at the check-point outside of the Pisgat Ze'ev neighborhood of Jerusalem where there are bus stops and people also get "tremps," rides.  When I'd pass people holding the signs, I just figured that they were very well organized.  Then I found out that a few weeks ago, somebody delivered the signs and set up a basket in the bus stop.  So, today, after my friend dropped me off, I took a sign, and a nice young lady preferred taking my picture than posing with a sign.  I have no idea who the girl is, but, yes, that's another example of how nice people are here.

Eventually, she called me over to ask if I wanted a ride to Ofra.  I got in, squashed in the backseat between a baby's carseat and a different young woman.  No complaints.  I'm glad I'm not the weight I was two years ago.

Well, we didn't get very far.  We were in one of those traffic circles so popular nowadays with city planners, and the driver's GPS said:

Well, there is no sign saying "exit."  The poor guy seemed terribly confused.  I quickly said:


"Left," and he gratefully turned left, and we were on our way.

But I knew that soon I'd have to explain how to maneuver the Adam Junction.  The wrong turn could take us to Ramalla.  I gave directions, there, too, since his GPS wasn't at all helpful.  I suggested that he complain to the company.

So Israel, so you. We live in a very special atmosphere where people help people in so many ways. In so many other locations, people are afraid to talk to others, shelter themselves. How sad for them. How fortunate for us.

Chaya, so true. We are blessed with the important things. And I left out the final stage of my trip home, a ride straight to my door. Thank G-d for good people!

Great sign.
But I thought people weren't supposed to say where they wanted to go, but were supposed to wait for the driver to say where s/he was going. (I never quite understood why it was safer this way. The one wanting the ride could be the "bad guy" just as easily as the one offering.)

Yes, very true, but the signs also encourage people to stop when they know they will really be helping someone. And it's guarded there.